Few days ago I had an opportunity to evaluate the new Sony NX5U AVCHD as a potential camera for our videography students. I recorded some sample footage directly on an SD card, and viewed it on a 46″ THX-certified plasma display equipped with a built-in SD card reader. Although I don’t want to get into any specific likes/dislikes about this camera, I do need to point out that I found the lens annoyingly soft. I immediately compared it to some old HD footage I shot on a (gasp!) Canon SX20 digicam only to confirm my initial observation: Sony’s footage did seem softer than what the little, cheap Canon was producing.

I decided to feed my curiosity a little more and proceeded to make a few quick video tests. I exported several frames from each camera to uncompressed TIFFs, the results of which you can see below (click on each image to download the uncompressed TIFF version.) 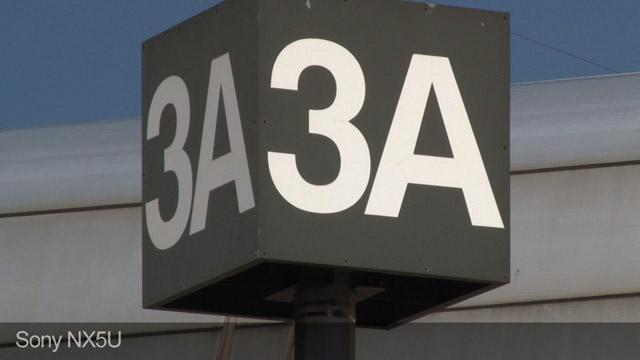 Here is the compressed MP4 version of the video clip.  (To watch offline, in full resolution, right-click and Save As…)

Clearly Sony’s image is a lot more refined, with no visible compression artifacts and no artificial boosts in saturation levels.  However, I still wonder if perhaps Canon is employing some quick-and-dirty image sharpening to give its video a little more “pop”?  Keep in mind that these are very basic qualitative tests, and while comparing a $400 digicam to a $6000 video camera is indeed a sin, I can’t help but wonder why at the end of the day I would be more attracted to images produced on an inexpensive digicam :)

Update: I recently met with Sony representatives to discuss my findings.  We went over all of the NX5U’s settings to make sure I didn’t miss anything and I had an opportunity to run a few more tests.  Unfortunately, I’m still bothered by the slight “glow” of the lens, and even though I must reiterate that the NX5U renders beautiful images, the softness of the images might leave some unimpressed, and others … well, might not even ever notice.